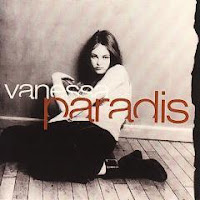 Where does the time go? I cannot believe it, but I'm already at my 100th post!!! That's 99 artists so far who have finally gotten the attention they deserve. And who better than Vanessa Paradis to be my 100th featured artist? Here is a woman who embodies everything the Isle is about - pop songs, eclectic fan base and very limited success in the pop charts (in North America, at least). We all know her story: young ingenue records "Joe Le Taxi" and shocks Europe by having a hit en francais, even in the UK! She records a few albums in French with European success, stars in a world famous Chanel commercial and hooks up with and bears the children of Johnny Depp. Girl has got it made. Except for her only foray into English language music... She lured then boyfriend Lenny Kravitz to produce her English debut. Thus the music is what one would expect, trippy, funky pop-rock with a '60's bent. She even covers the Velvet Underground's "I'm Waiting For The Man". The video for "Be My Baby" got some North American exposure, and the song itself was a hit in Europe. But North American audiences apparently didn't take to her girlish coo. She has yet to release an English follow-up, but after this she did release more French albums to some success. And by being with Johnny she guaranteed herself a lifetime in the spotlight.

Video for Be My Baby