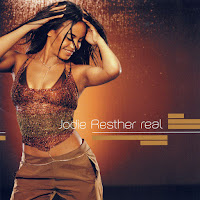 Jodie Resther is yet another in a long line of Canadian pop-R&B singers touted as the next big thing whose singing career really didn't get off the ground (see also Patria and Jazmin, also here on the Isle). Though pop-R&B was getting a lot of attention at the time of her album's release, it was mainly white and/or American acts getting the spotlight. Canadian R&B wouldn't garner attention until many years later, and even still it's limited. Jodie was born in Montreal but had a strong Jamaican influence thanks to her mother. She delved into both music and acting. As a child and teen she starred in successful kids programs like Are You Afraid Of The Dark, Vampire High and the cartoon Arthur. Taking advantage of this success, she signed with Aquarius Records to pursue her true passion, music. Much of her debut album involved the people behind other Isle postees Jazmin, Sugar Jones and Velvet Empire, the go-to guys for the pop-R&B vibe in Canada. She released the title track as her first single, but it generated even less attention than her contempories', and Jodie's music career came and went with barely a whimper. She continued to do voice work for Arthur while still dabbling in music. Finally she reemerged in the music world on an indie label in 2006 with the French album Ma Dualité, the sound of which she dubbed "ragasoul" and was heavily influenced by her Jamaican roots. But since then she has remained rather quiet, and both her website and Myspace page haven't been updated since 2007. Interestingly her bio on both makes no mention of Real or her acting career. However, her song "Soldier" from Ma Dualité was recently chosen as the theme song for something called AquaThon, so chances are she'll be back with more music soon, though my guess is it will be in French, so yay for all you Francophones! ;)