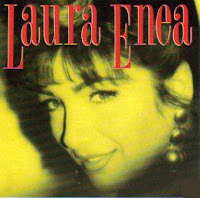 No artist frustrates me more than Laura Enea. Here is a woman with a great voice and beauty who released two major label albums and even had a Billboard Top 100 pop hit, and yet I have never been able to find biographical information on her. Of course, she does have a Facebook account and I could write her there and ask her for some details, but I don't like hounding artists on Facebook. That's what fan pages are for! She needs one STAT! But of course, should anyone else care to invite her there as a friend and get the scoop, I wouldn't stop them (hint hint ;). What we do know is that she was signed to Next Plateau and released her self-titled album in 1992. The first single, "This Is The Last Time", was the song that made it into the top 100, to #70. It rode on the wave of the freestyle frenzy that happened in 1991, but came just as that wave was crashing and freestyle was heading back underground. While the album included several freestyle cuts (my fave being "Red Light Green Light", written by Laura herself) and the freestyle track "Our Love" was also released as a single, she also obviously had a taste for the pop of Stock, Aitken & Waterman, as she faithfully remade Kylie's "Especially For You" and "Better The Devil You Know", and Princess' "Say I'm Your Number One", and even released the latter two as singles. They were not terribly successful, but Next Plateau gave her another chance. Her next album also contained freestyle tracks, as well as remixes of "This Is The Last Time" and "Say I'm Your Number One", but this time she included some R&B flavoured tracks, as well as a remake of Evelyn 'Champagne' King's "Your Personal Touch". The title track was released as a single, but failed to generate any heat, and Laura was dropped from the label and seemed to drop off the face of the earth as well. One more freestyle single, "Can We Find A Way", appeared on the Micmac label in 1996, but other than that nothing has been heard from her since. However, she is rightly hailed as a queen of freestyle, and us fans would love to know what she's up to now (hint hint;).

Video for Say I'm Your Number One

Live performance of This Is The Last Time