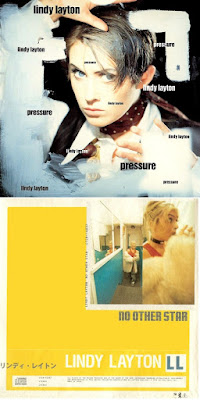 Thanks to a wishlist fulfillment from Konstantin, I can now share both albums by British singer Lindy (aka Belinda) Layton.  I became aware of Lindy way back in 1990, when her group Beats International, which also included Norman Cook, aka Fatboy Slim, had a huge pop-reggae #1 UK and #1 Billboard Dance Chart hit with "Dub Be Good To Me", a remake of SOS Band's R&B hit "Just Be Good To Me". I knew that she had a solo career after that, but only managed to get my hands on her first solo album a few years ago, Now, thanks to Konstantin, I have both! And luckily Wikipedia has an entry on her solo work, which makes my job here easy. After having another UK top 10 hit with "Won't Talk About It", Beats International's subsequent singles and album did not fare near as well.  Before Beats started working on their second album, Lindy was snatched up by Arista for a solo career.  Her first single was a remake of Janet Kay's 1979 reggae UK #2 hit "Silly Games".  Lindy's version reached #22 on the UK chart. Her album soon followed, as did the #42 hit "Echo My Heart".  The album had many tracks similar to the reggae pop of Beats International, but it also moved into house music as well.  It also included a remake of Prince's "Do Me Baby".  After the next two singles "Wait For Love" and "Without You" failed to take off, Lindy was dropped from Arista.  She released the house single "I'll Be A Freak For You" the following year on a smaller label, and was soon signed to PWL.  On PWL she released two poppier singles, "We Got The Love" and "Show Me", which reached #38 and #47, respectively, on the UK pop chart. She was then dropped from PWL as well.  It would take her three years to release more music, which she passed mainly DJing. The album No Other Star was only released in Japan on the Cutting Edge label, and the only single release from it was "Who Do You Think You Are?", which failed to chart.  She had returned to her pop reggae roots, which was clearly out of vogue by the mid-nineties. She then teamed up with DJ Steve Proctor to form the breakbeat duo Hardknox in 1997. They released their first single "Coz I Can" on the Skint label, and two years later released their self-titled album on Jive Electro. It was not a great commercial success, but was favoured by the underground scene. Nothing much was heard from Lindy until 2009, when she appeared on tracks on albums by both the Dub Pistols and the Groove Diggerz, such as "I'm In Love" and "Body Flow", as well as a remake of "Just Be Good To Me".  She featured on two other Dub Pistols albums on the tracks "Rock Steady" in 2012, and "Our Life" in 2015.  She also had a daytime radio show in 2013 called The Mrs.  She now focuses on songwriting and DJing, but hopefully she will return to making music some time soon.

Video for Without You