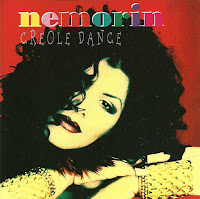 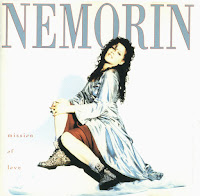 So, I was looking into the work of Toby Gad, the Danish super-producer and songwriter who has worked with the biggest pop stars in the world, including Madonna, Fergie, Ricky Martin, Selena Gomez, Kelly Clarkson, Demi Lovato, and Beyonce, and I came across an artist he worked with who I had never heard of before, Nemorin.  I checked out a couple of her videos and liked what I heard, so I ordered her two CDs.  Little did I know at the time that she was once Toby's girlfriend and that she had an extensive career of her own. Jacqueline Nemorin was born in Mauritius. She moved to London with her parents, and then to Germany on her own, where she married German producer and composer Frank Diez.  In Germany she also hooked up with disco composer and producer Veit Marvo and became part of his Red Point Orchestra in 1972.  She also did a lot of session singing.  She soon changed her name to Jackie Carter and briefly became part of disco trio Silver Convention.  Before they released their first album and biggest hit, "Fly, Robin, Fly", Jackie was replaced in the group and only sang lead on one album track, "Please Don't Change The Chords Of This Song".  However, she soon signed a solo deal with Atlantic Records and released her first album Treat Me Like A Woman in 1976.  She released the moderately successful singles "Treat Me Like A Woman" and "Just Like Lightning", but then lost her deal with Atlantic. In 1977, she performed in the German musical Tell!, and in 1978 she released disco remakes of the Rolling Stones' "Paint It Black" and The Supremes' "You Keep Me Hangin' On". In 1979, she released her second album, Ruby Shoes, which was produced by her husband.  She released the singles "Stay For The Night" and "Ohh, What A Way To Go" to little success. In 1980, she and her husband joined Eric Burdon's Fire Dept. for one album.  She did mainly backing vocal gigs after that and then released her last single as Jackie Carter, "Heat Of The Night" in 1985.  She also returned to Mauritius that year for her own TV special. Also that year, she joined the pop vocal quartet The Hornettes.  She stayed with the group until 1993, wanting to concentrate on her solo career.  During her time in the group, she released the solo single "A Ci Lelao", which took influence from her Mauritian background and took on a world pop sound. In 1990, she met Toby Gad, who at the time was best known for his work with producer Frank Farian with Milli Vanilli.  She had divorced her husband in 1987. When Jackie left the group, she and Toby started writing together, which led to her first album as Nemorin, Creole Dance.  It included "A Ci Lelao" and took it's overall sound from that.  Toby took the reigns as producer, and they both wrote the songs.  "It Feels Good To Be Loved" was the only other single released.  Working on the album began a long romantic and professional partnership between the two, and Jackie started to write and produce as well.   In 1994 she had two songs on the soundtrack for The Neverending Story III, "Mission Of Love" and "Dream On (The Neverending Story)".  "Mission Of Love", which was in the eurohouse vein, was released as a single and saw some success in clubs.  An album followed the next year, with Toby again producing and the sound again incorporating world music. "Boat On The River" was released as the only other single. Jackie and Toby also formed the group Love You that year, and released three singles. including "Countdown For The Summer". The two then moved to New York and started working together for other artists, writing and producing pop songs for artists like Enrique Iglesias, Taylor Dayne, PYT, Sita and K-Otic.   They also released a song, "Free As A Bird", as Qute in 1999. After they separated in 2000, Jackie moved back to Germany and sang with the band Rubbersoul, and later moved to London, where she continues to write, produce and record. A pretty full career, I'd say, especially for someone I'd never heard of before!

Live performance of It Feels Good To Be Loved


Video for Mission Of Love