Hi all! Due to life events, I will not be posting or reupping albums very much in the future. If I do have time to reup albums, I will let you know either in the Chatbox or will reply to your comments. Some of the albums might be available on the Facebook group mentioned below. Thanks for understanding!
For Facebook users, please check out and join my new sharing group Trashy Treasures, featuring 70s, 80s and 90s music pleasures!! A lot like the Isle, but with everyone able to contribute and discuss the tasty old music we love!!!
For all you pop lovers on Facebook, you should join the Pop Rush Community Facebook page immediately. Lots of amazing shares of great pop music from the 1990's and 2000's!!
If you wish to download an album off of this blog and the link is dead, please request it either in the comments or the Chat Box and I will reupload it as soon as possible. :)
And don't forget to follow the Isle on Facebook and Twitter! 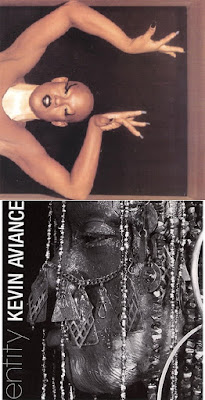 Kevin Aviance was born Eric Snead in 1968 in Richmond, Virginia. With a love for music, theatre, fashion and drama, he moved into drag at a young age, with punk being a huge influence, as well as obvious influences like Grace Jones and Boy George.  He moved to Washington, D.C. to be a hairdresser and drag performer, but also developed a bad drug habit.  Luckily his life turned around when he was discovered by The House Of Aviance, a vogue-ball house based in New York City that was one of the premiere groups on the voguing scene. Changing his name to Kevin Aviance, he moved first to Miami and then to New York City where he became an acclaimed drag performer at the Sound Factory. In 1994 he made a cameo in Madonna's "Secret" video and soon made the natural progression to making music of his own.  His first single, "Cunty (The Feeling)", was released on Strictly Rhythm in 1996 as 'Rageous Projecting Kevin Aviance'.  It garnered enough notice to get him signed to legendary DJ François Kevorkian's Wave Music.  His next single was a remake of George Kranz's 1983 dance hit "Din Daa Daa".  It quickly went to the top of the Billboard Dance Chart in 1997, and also hit #65 on the UK singles chart in 1998.  It is likely his best remembered song.  His next single was a remake of "Join In The Chant", a 1987 dance hit by EBM group Nitzer Ebb.  Kevin's version managed to reach #8 on the Billboard Dance Chart. The success of the singles led to the album A Box Of Chocolates, released in 1999.  That same year he performed in the film Flawless. The first single "Rhythm Is My Bitch" climbed to #2 on the Billboard Dance Chart, though the next single, "Dance For Love", failed to chart. Interestingly, that was the first single that Kevin actually sang on, as his signature style was spoken word.  He signed to Centaur Entertainment a couple of years later and released "Alive" in 2002, which once again hit the top of the Billboard Dance Chart.  The album Entity soon followed, as did the single "Give It Up", another #1 hit and his biggest to date.  This album had Kevin singing on all of the tracks, and is much better than his first, IMO. After leaving Centaur, Kevin released another single, "Strut", which managed to reach #13 on the Billboard Dance Chart in 2006, a couple months after Kevin was robbed and gay-bashed by a group of up to seven men.  This resulted in his jaw being wired shut for a month, as well as a fractured knee.  He persevered and discussed the experience on The Tyra Show.  Since then he has returned to the stage and reamins a drag icon.  He has released a few singles including "Hold On Me" with Tom Stephan vs S-Man in 2007, a remake of Britney Spears' "Gimme More" in 2009, and most recently "Bang, DaBeat" with Samuri in 2017.  Obviously Kevin will not be going anywhere anytime soon, and the gay world wouldn't have it any other way.

Video for Join In The Chant

Video for Rhythm Is My Bitch

Video for Dance For Love

Nasty G
Toronto, Ontario, Canada
I am a life-long music fiend, with a taste for the obscure and cheesy!