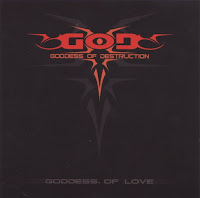 Pretty much all I need to say about Goddess Of Destruction was already said in my Darling Nikkie post, since the woman behind both is the one and only Nikkie Van Lierop. I made my adoration for her and her work known there, and Goddess Of Destruction is no exception.  I must again thank Konstantin for sharing this with me awhile back. Goddess Of Destruction was marketed as a band, but Nikkie is clearly the star of the show here, though she uses the moniker Max RedStone to downplay her past and make the project seem fresh and new.  After testing the waters of light, alterna-pop-rock as Darling Nikkie - to minimal success - Nikkie went back to her roots of techno, but this time pushing it harder, adding many industrial elements to the mix, a sound she explored as part of Lords Of Acid.  Goddess Of Destruction is even more rock-based, and Nikkie goes into it full throttle.  From what I gather, the album was only released in Belgium, and no official singles were released, though a video for "To The Limit" was made, which is great as it's my fave song from the album.  If you're like me and have a taste for hard music, this rarity is for you.

Video for To The Limit