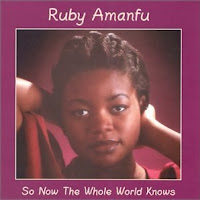 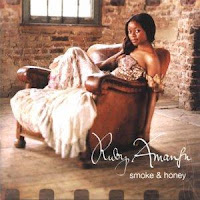 Here we have an artist who, like so many other lost pop stars, was a victim of record label turmoil and interference. Ruby Amanfu was born in Accra, Ghana, and as a small child moved to Tennessee, where she honed her songwriting and vocals and, while attending high school, recorded and released her debut album, So Now The Whole World Knows, on an indie label (Thanks Liz!). She then attended Berklee College Of Music in Boston, but soon moved back to Nashville to attend Belmont University and worked on promoting the album. Ruby was compared to artists like Tracy Chapman and Jewel due to her thoughtful lyrics and folk sound. She was soon snatched up by Polydor - but in the UK. It's actually not that surprising, as Ruby comes off as a cross between two once popular British singers, Gabrielle and Samantha Mumba. She was teamed up with a slew of popular Nordic producers, some who worked with artists like Britney, Dannii, Geri, and Sophie, and also on other albums featured here like Stella Soliel, Juliette, and Lene, who recorded Ruby's song "Surprise" for her solo album. The resulting album contained very soulful pop laced with rock. The first single "Sugah" became a huge hit in the UK and Europe. The second single, "Chocolate Pie", did not. But by this point Ruby was back in the US, tired of label pressure and strife. She asked to be dropped, and the album never made it over the pond. She then pursued an independent path, writing songs for others (one - The Duhks' version of "Heaven's My Home" - was even nominated for a Grammy in 2007) and also hooked up with longtime friend Sam Brooker for the folk duo Sam & Ruby in 2005. They have released one album on Rykodisc and two EPs since, and they also joined Nashville vocal group The Collective and appeared on Season 3 of The Sing Off, coming in eighth.  In 2011, Ruby toured with Jack White and did vocals for his album Blunderbuss, and she released her EP The Simple Sessions the following year. She also sang co-lead vocals on the single "Love Interruption" with White, which they performed on the Grammy's in 2013.  That year she also released the single "I Wonder" with Brittany Howard, the lead singer of Alabama Shakes, on Jack White's label. Most recently she appeared on Jack White's second album, Lazaretto, and has been touring with indie sensation Hozier and appeared with him on Saturday Night Live in 2014, so clearly she is still going strong and the best is likely yet to come...and it has!  Ruby released a new album at the end of August, 2015!  Check out Standing Still on iTunes!!