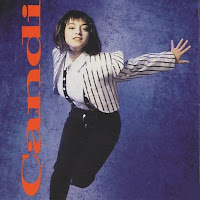 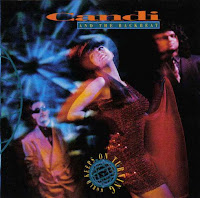 Once again I present a group who I have had overwhelming demand for, and I finally located the CDs in my collection, so here we are. ;) This is the epitome of 80s dance pop. Candi was a group of Italian-Canadians who initially toured the wedding circuit as a cover band apparently called Sensation. It consisted of singer Candita Pennella, bassist Nino Milazzo, drummer Paul Russo and keyboardist Rich Imbrogno. Somehow they got the attention of I.R.S. Records and signed on, changing their name to Candi, a moniker obviously taken from their lead singer, and also a good description of their music. Their first single, "Dancing Under A Latin Moon", was an instant hit in Canada and soon also blew up in the US, reaching number 68 on the Billboard Hot 100. It's Latin sound was in vogue at the time thanks to the popularity of the freestyle genre as well as Latin influenced artists like Gloria Estefan (though the rest of the album wasn't very Latin-flavoured). Three other singles were released from the album (which was produced by popular remixer David Shaw with assistance from hot pop production duo Sergio Munzabai & John Morales) and they were all big hits in Canada: "Under Your Spell", "Missing You" and the ballad "Love Makes No Promises". (Also check out the song "Pleasure Island", which uses the melody from Isle postee Liberty Silver's "I Do Love You".) The group and Candita were even nominated for several Juno awards. But their success didn't continue south of the border, unfortunately. This didn't stop them from releasing a second album, but this time as Candi And The Backbeat, thanks to people often confusing 'Candi' as Candita herself and, thus, a solo act. The name change made sure people acknowledged the boys as well (though Imbrogno left the group to become a successful freestyle producer). Though they were now produced by relative unknown Robert Brown, their sound stayed very much the same, and they had more Canadian hits with "The World Just Keeps On Turning", "Friends Forever", and "Good Together" (but likely the most interesting track for pop lovers here will be their remake of the SAW song "Getting Closer", made famous by Haywoode and also recorded by Kylie ;). But their success remained within Canada's borders and quickly waned, and they soon ceased to be. It is said that Candita married Russo and now teaches music at a high school somewhere in Toronto. Oh, how I would love to run into her, and if I do, I'll be sure to get the scoop on her time with Candi and what she's done since, and I'll definitely share it here! ;)

UPDATE: I recently discovered that Candita did the lead vocals for a track in 1986 called "Humpty Dumpty" by Rainbow.  It's a cute kid-centric Hi-NRG song.  Download it HERE.

Video for Dancing Under A Latin Moon

Video for Under Your Spell

Video for Love Makes No Promises

Video for Missing You

BONUS: Thanks to Steve, here are some Candi remixes. Thanks Steve!!


Video for The World Just Keeps On Turning

Video for Good Together