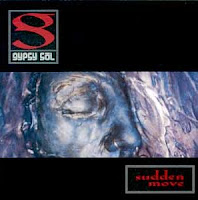 So I was looking through some old boxes of CDs and I ran across this dusty one.  I'm sure I picked it up for $1 somewhere and am sure I only listened to it once, so I had no idea what it sounded like.  Thinking of this blog, I pressed play and am glad I did as it is quite good and perfect for the Isle!  A little research reveals that the band was originally known as Gypsy Soul and released one independent album, but had to change the spelling of their name due to an American group using the same name.  Formed in Toronto in the mid-90s, they were originally a heavy funk rock band, with a male lead singer.  After exploring R&B, they swapped their lead singer for Katey Morley, and with her came a more pop rock sound, albeit with healthy doses of funk and jazz and even trip hop.  With Morley on lead vocals, the total count was seven members: Darren Shearer (drums, percussion, didgeridoo, human beatbox), Evan Cranley (trombone, congas), Ewan Miller (guitar), Trevor Bedard (bass, acoustic guitar), Nat Roman (guitar), and Cathy Craig (trumpet, percussion - interestingly Cathy also appeared on my last postee What Is's album as well).  The band toured locally and eventually caught the interest of Universal Records.  Their album was well reviewed, as were their shows, but the band remained only a local success, and some believed their change to a poppier sound may have been their undoing.  They broke up, and since then many of the members have went on to greater success.  Darren Shearer immediately went on to form progressive electronic trio The New Deal, who broke up in 2011.  Evan Cranley is a member of both successful indie pop band Stars and hugely successful indie rock collective Broken Social Scene.  Ewan Miller and Trevor Bedard have recorded and toured with independent singer-songwriter Amanda Kaye.  And Katey Morley has done session work for other acts in genres as diverse as jazz and trance, and also formed her own jazz band.  She is currently a solo act, touring around her native Toronto in support of her folk-jazz solo work when not busy at her job as a DJ.