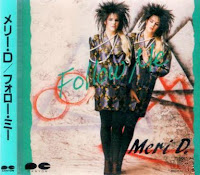 Hey all! I'm moved and am ALMOST back in action. I've taken note of your votes and will post the most requested albums when I can find them in the many unpacked boxes I have. LOL To tide you over, I give you the only album by Meri D. Marshall, courtesy of the extreme generousity of Musicbeing. Thanks so much! I know nothing
about this woman other than she starred in some movie called Valet Girls. I've never heard this album till now either and it's perfect for this blog! It reminds me of a lost Laura Branigan or Bonnie Tyler album. Enjoy, and I promise I'll get back into the groove SOON! 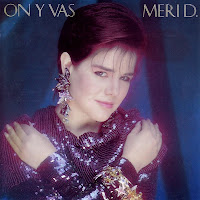 **UPDATE - After a bit of surfing I discovered that Meri released two other albums in Japan as simply Meri D., one a 1986 re-release of this album titled Follow Me with the songs "Follow Me" added and "Watcha Gonna Do" omitted, and another entitled On Y Vas, which was also the name of the first single. Thanks to Consolecharlie for offering links to these two albums as well!! Thanks so much yet again, CC!

**UPDATE #2 - Thanks again to the indespensable Consolecharlie, Meri D. has been located!! She's alive and well and still singing, and has her own website HERE. Now known as Meredith Marshall, the native Texan continued to write and record with many well-known artists through the '90s and 00's (even recording a duet with Bruce Willis!) and she was part of roots-rock band Zelda. Delightfully she now lives in my homeland, Canada, in Montreal and is now working on a new album. Go to her website for more!!

And she now has her own Facebook page!! Please go there to keep up on everything Meri! She's a class act! :)

Video for My Obsession

Akasa - One Night In My Life (album)
Camille - Every Step Of The Way
Camille - Holdin' On
Charlie - To Be Continued
Cruisin' Gang - Lazada
The Daisy Project - Destination Of Love
Debbie McKayle ‎– I'm Here
Gerard - Gerard
Gillette - Did I Say That?
Heaven On Earth - Dedication
Ingrid Sunday - Modern World
Lateasha - Move On You
Lola - Take It Like I Give It
O'chi Brown - Love For You
Pleasure - Michael